It was the gloomiest, most depressing bathroom Harry had ever set foot in.

Under a large, cracked, and spotted mirror were a row of chipped sinks.

The floor was damp and reflected the dull light given off by the stubs of a few candles, burning low in their holders;

the wooden doors to the stalls were flaking and scratched and one of them was dangling off its hinges.

Hermione put her fingers to her lips and set off toward the end stall.

When she reached it she said, "Hello, Myrtle, how are you?"

Harry and Ron went to look.

Moaning Myrtle was floating above the tank of the toilet, picking a spot on her chin.

"This is a girls' bathroom," she said, eyeing Ron and Harry suspiciously. "They're not girls."

"No," Hermione agreed. "I just wanted to show them how er - nice it is in here."

She waved vaguely at the dirty old mirror and the damp floor.

"Ask her if she saw anything," Harry mouthed at Hermione.

"What are you whispering?" said Myrtle, staring at him. 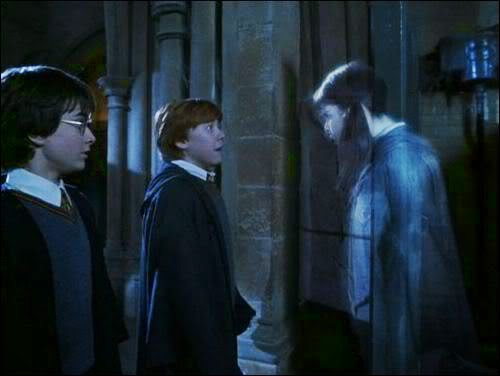 "Nothing," said Harry quickly. "We wanted to ask -"

"I wish people would stop talking behind my back!" said Myrtle, in a voice choked with tears. "I do have feelings, you know, even if I am dead -"

"Myrtle, no one wants to upset you," said Hermione. "Harry only -"

"No one wants to upset me! That's a good one!" howled Myrtle.

"My life was nothing but misery at this place and now people come along ruining my death!"

"We wanted to ask you if you've seen anything funny lately," said Hermione quickly.

"Because a cat was attacked right outside your front door on Halloween."

"Did you see anyone near here that night?" said Harry.

"Peeves upset me so much I came in here and tried to kill myself Then, of course, I remembered that I'm - that I'm "

Myrtle gave a tragic sob, rose up in the air, turned over, and dived headfirst into the toilet, splashing water all over them and vanishing from sight,

although from the direction of her muffled sobs, she had come to rest somewhere in the U-bend.

Harry and Ron stood with their mouths open, but Hermione shrugged wearily and said, "Honestly, that was almost cheerful for Myrtle .... Come on, let's go."