The door of the house where the boy lived was unlocked and he opened it and walked in quietly with his bare feet.

The boy was asleep on a cot in the first room and the old man could see him clearly with the light that came in from the dying moon.

He took hold of one foot gently and held it until the boy woke and turned and looked at him.

The old man nodded and the boy took his trousers from the chair by the bed and, sitting on the bed, pulled them on.

The old man went out the door and the boy came after him.

He was sleepy and the old man put his arm across his shoulders and said, "I am sorry."

They walked down the road to the old man's shack and all along the road, in the dark, barefoot men were moving, carrying the masts of their boats. 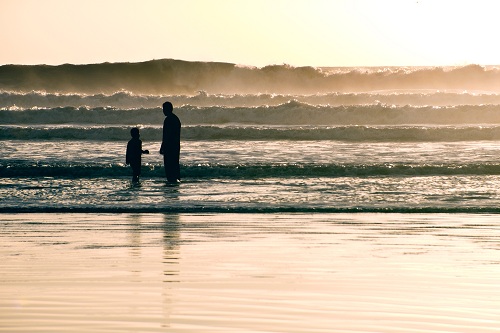 When they reached the old man's shack the boy took the rolls of line in the basket and the harpoon and gaff and the old man carried the mast with the furled sail on his shoulder.

"Do you want coffee?" the boy asked.

"We'll put the gear in the boat and then get some."

They had coffee from condensed milk cans at an early morning place that served fishermen.

"How did you sleep old man?" the boy asked.

He was waking up now although it was still hard for him to leave his sleep.

"Now I must get your sardines and mine and your fresh baits. He brings our gear himself. He never wants anyone to carry anything."

"We're different," the old man said. "I let you carry things when you were five years old."

"I know it," the boy said. "I'll be right back. Have another coffee. We have credit here."

He walked off, bare-footed on the coral rocks, to the ice house where the baits were stored.

It was all he would have all day and he knew that he should take it.

For a long time now eating had bored him and he never carried a lunch.

He had a bottle of water in the bow of the skiff and that was all he needed for the day.

The boy was back now with the sardines and the two baits wrapped in a newspaper and they went down the trail to the skiff,

feeling the pebbled sand under their feet, and lifted the skiff and slid her into the water.

He fitted the rope lashings of the oars onto the thole pins and, leaning forward against the thrust of the blades in the water, he began to row out of the harbour in the dark.

There were other boats from the other beaches going out to sea and the old man heard the dip and push of their oars even though he could not see them now the moon was below the hills.